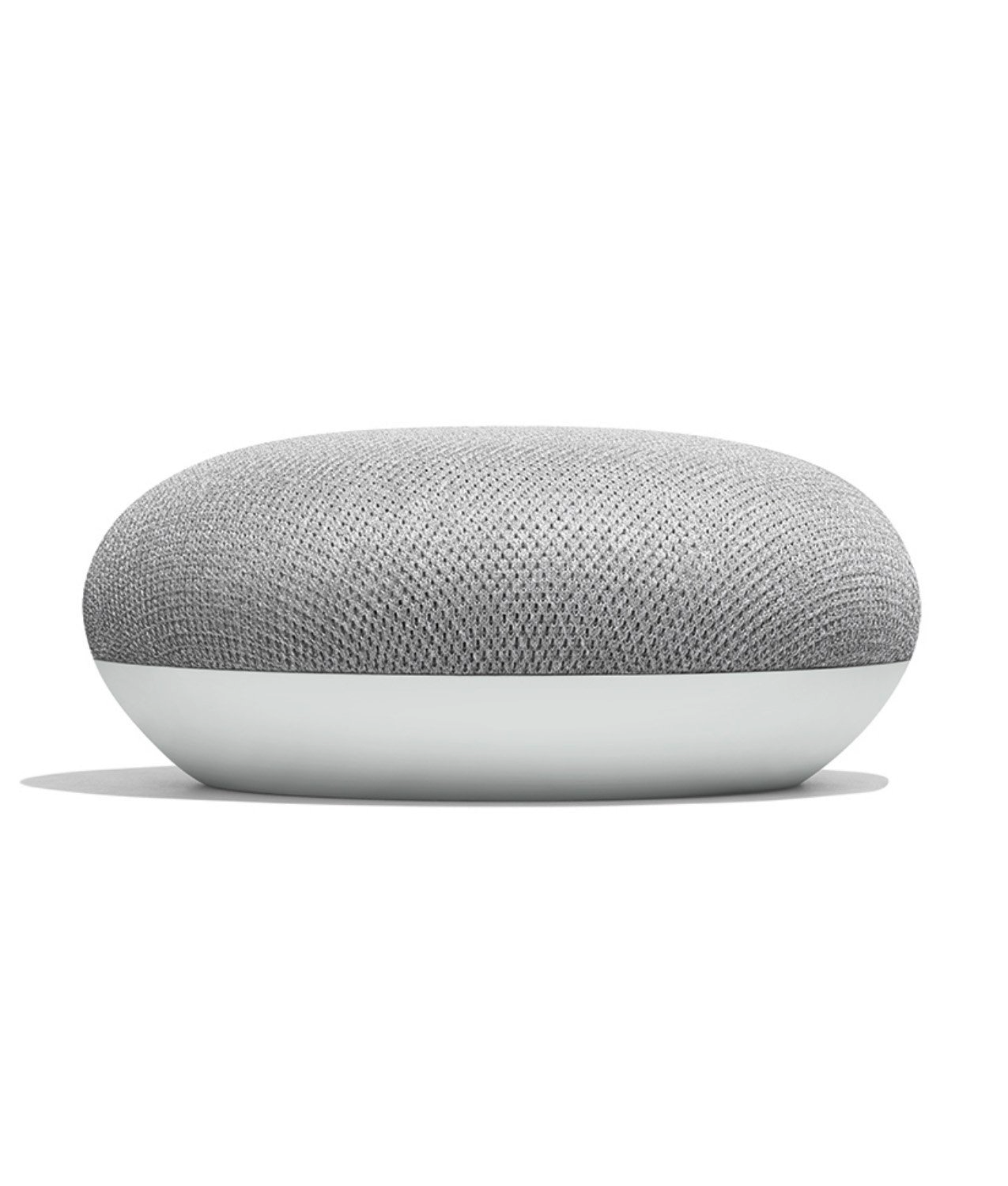 “The powerful little helper that gives you answers to questions, controls your smart home, shares weather info, and even plays music.” 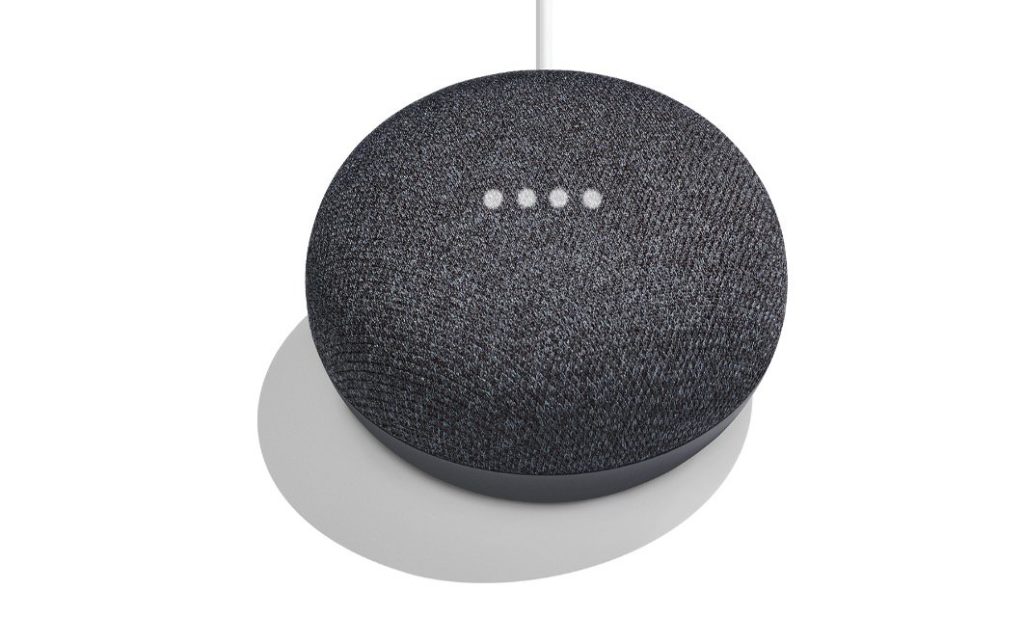 The Google Home Mini is clearly a response to the Amazon Echo Dot. The price point of the Echo Dot is $39.95 and will likely be brought down to $19.95 during the holiday shopping season of 2017.  Walmart is also running a promotion with Google Express that cuts the price of the Home Mini down to just $24 using a $25 discount on any items ordered with the service through January 15th.

There will be a very aggressive promotion of the Google Home Mini at Walmart and at their recently acquired Jet e-commecre company.  The power of the Jet platform and Google Home Mini is one of the most important aspects of the future of Google Home.  Voice Commerce is perhaps one of the most critical aspects of any successful Voice First platform and Google is starting from a weaker position but also a laggard position.  Google had the opportunity to define the Voice First market as did Apple, yet maladvice and listening to the wrong advice and vision has both companies in catch-up mode. 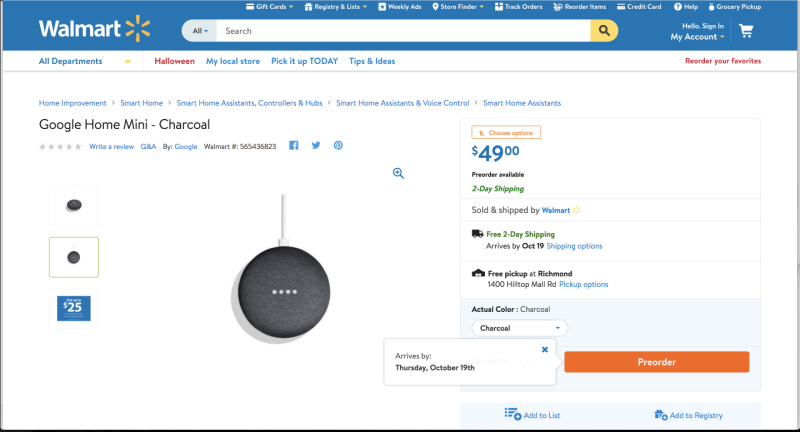 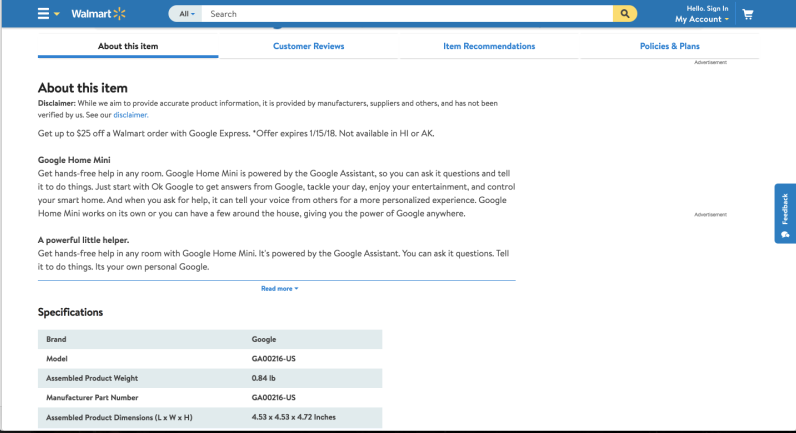 There is no pay-per-click advertising in the Voice First world and the Google Home Mini with Walmart is an attempt to gain equal footing with Amazon.  I wrote about the Google quagmire last year in Forbes [1] and although this relationship is important, there will be much more needed to allow Google to catch up.  We are at a point where there are about 12 Voice Commerce experts in the world in 2017, the world needs over 1,000 today.

We will see and hear a lot more about the Google Home Mini on October 4th, 2017 and perhaps the high fidelity Google Home Max also.  We will hear a great deal about AI and how Google is leading in AI.  We will see a more advanced version of the Google Assistant.  All of this is good and needed. However for Google to catch up to and pass by Amazon in Voice First leadership, and out think the 5,000 person Alexa army, hopefully Google will begin to transform.  The transformation is beyond the much triumphed “engineering culture”. The transformation will come by understanding the shift to human culture assisted by engineers.  This is hopefully what we see more of from Google on October 4th, 2017.

Update October 4th 2017. Turns out we were accurate about the Google Home Mini and more. You can get the full download here http://readmultiplex.com/2017/10/04/the-new-google-home-product-line-form-mini-to-max/. This is the mini version:

The Google Home Mini is the new small scale device priced at $49 retail.  The Mini will have three color choices “chalk,” “charcoal,” and “coral”.  The device is very much like Amazon’s Echo Dot.  It’s not designed explicitly to play music, it is meant to get the Google Assistant into more rooms of your home, making it better for getting news and schedule updates, listening to podcasts, and sending instructions to other Google-connected products like a Chromecast Audio-equipped speaker. It will also connect wirelessly to any any speaker with Chromecast built in.

The Mini will have some new kid-friendly features that brings story time and gaming to the device with a new partnership with Disney, kids can enjoy some of the company’s exclusive characters from Lightning McQueen to Star Wars.  Google is also working with partners like Warner Brothers and Sports Illustrated Kids.  This new kids sector for Voice First devices will soon be open to developers and these features will be arriving on Home later this month.  All Google Home devices will have a family-linked account settings to the Google Home so that different permissions can be set through the Family Link service with a parental feature to set for children below the age of 13.

Another new feature is “Broadcast” which will allow you to push voice messages and reminders across all of your Google Home devices.  You invoke by saying “Hey Google, broadcast this” for example “Hey it’s time to get up for school!” or “Dinner is ready” Google Assistant will push the message to all your devices including the new Pixel Phone and PixelBook.  The vision is to have a Mini in every bedroom and it is a powerful idea.