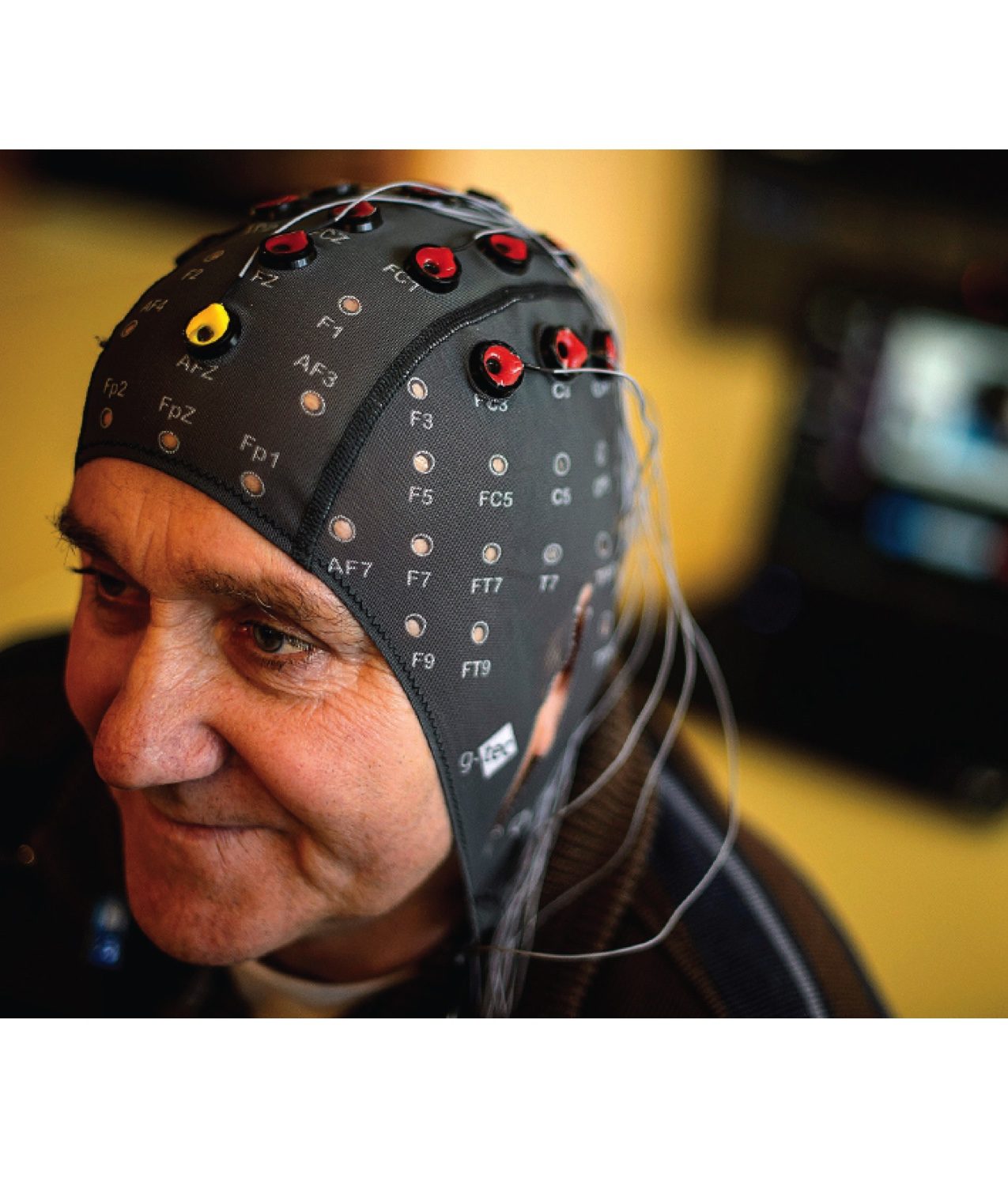 Think Of A Word. You have Just Produced A Future Voice First Command

Today at Facebook F8 Regina Dugan, a former DARPA executive and current head of Facebook’s research and development lab, with her team of 60 scientists in Building 8 have released information on a non invasive way to build brain/computer interfaces meant to let you “communicate using only your mind”.

This all sounds very far off, perhaps dystopian scary, and in some ways it is, but not as far as many would think, perhaps less than 10 years and it may not be all that scary.  The fundamental premise is simple; your words are the best computer interface.  Facebook now concedes this and they will find ways to maximize spoken words and and “Silent word” that you can say in your mind to become the ultimate computer interface. 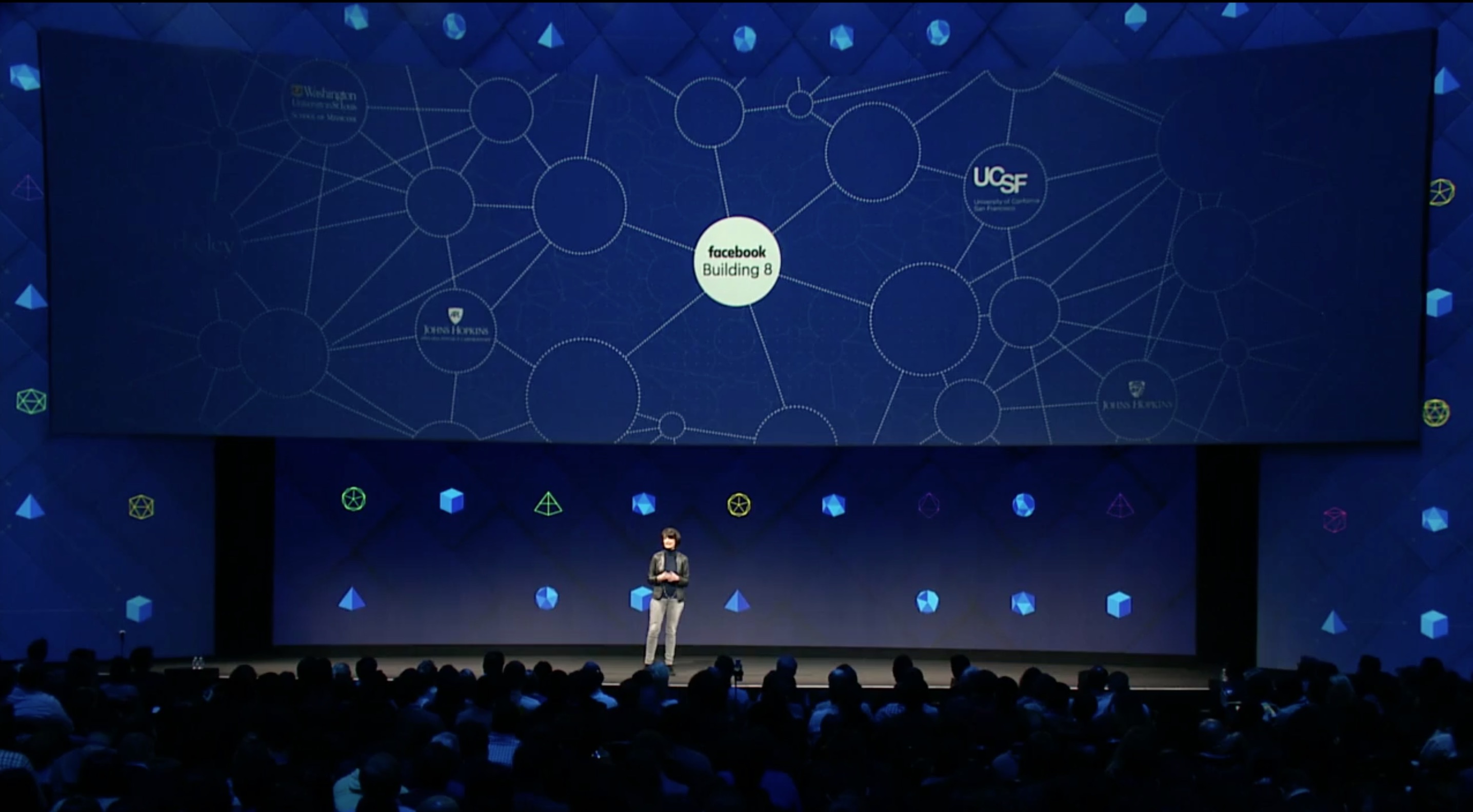 This isn’t about decoding random thoughts. This is about decoding the words you’ve already decided to share by sending them to the speech center of your brain. Think of it like this as you send words to your speech center, you have already edited out the thought process and are sending only the product of your thoughts.

I have privately spoke of what I call Silent Voice First interfaces for over 10 years.  Most recently I gave a symposium to a large VC firm on Sand Hill Road and I spent some time on this topic.  The concept is simple in that we all say the words we speak in our minds before we speak them.  In some situations, perhaps not as many as we imagine, we may find the need to just think the words we want to say to our Voice First Personal Assistants rather than speaking them aloud.  Facebook identified this issue and is building the new systems around the old science of hemispheric brain energy scans surfacing the speech centers and through AI and Machine Learning (ML) using this data to extract word intents. 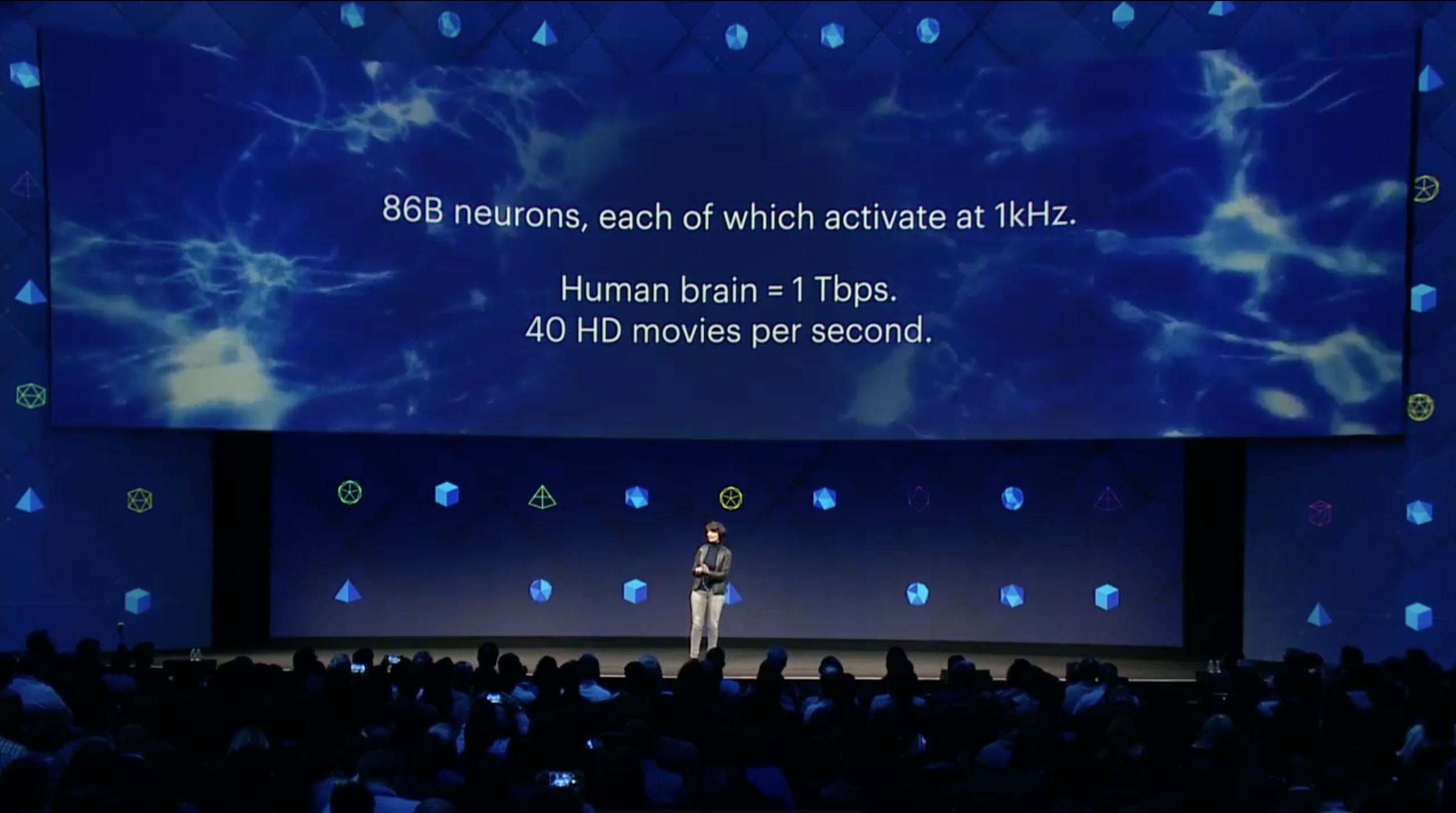 Regina Dugan talk was riveting to anyone unfamiliar with Voice First research.  Here are some of the highlights of the event are below:

The thinking-to-text project is headed up by Mark Chevillet, previously an adjunct professor of neuroscience at Johns Hopkins University.  Chevillet said the goal over two years is to build a noninvasive system that harnesses picks up speech signals inside the brain and permit people to silently turn those thoughts into text at a speed of 100 words per minute.

“We just want to be able to get those signals right before you actually produce the sound so you don’t have to say it out loud anymore”—Mark Chevillet, Facebook Building 8

Facebook will collaborating with Johns Hopkins, the University of California, Berkeley, and the University of California, San Francisco on the project,  the research will focus on finding a way to use light, like LEDs or lasers, to sense neural signals emanating from the cerebral cortex.  The current method works in a way that is similar to how functional near-infrared spectroscopy is currently used to measure brain activity.  However it will be used to model the speech centers in the brain to convert the signals into patterns the AI and ML can decode into speech.

This headband lined with low powered lasers can see brain activity and allow to ”think” a message rather an typing it, or send a text in the middle of a conversation. Chevillet said there are already some good demonstrations of brain-computer interfaces, like a recent study in which three people with paralysis were able to use their minds to select letters using an on-screen cursor, one of them typing at eight words per minute. In that study, a brain implant inside the brain recorded neural signals connected. Others have experimented with trying to interpret what sounds people are making or thinking about. 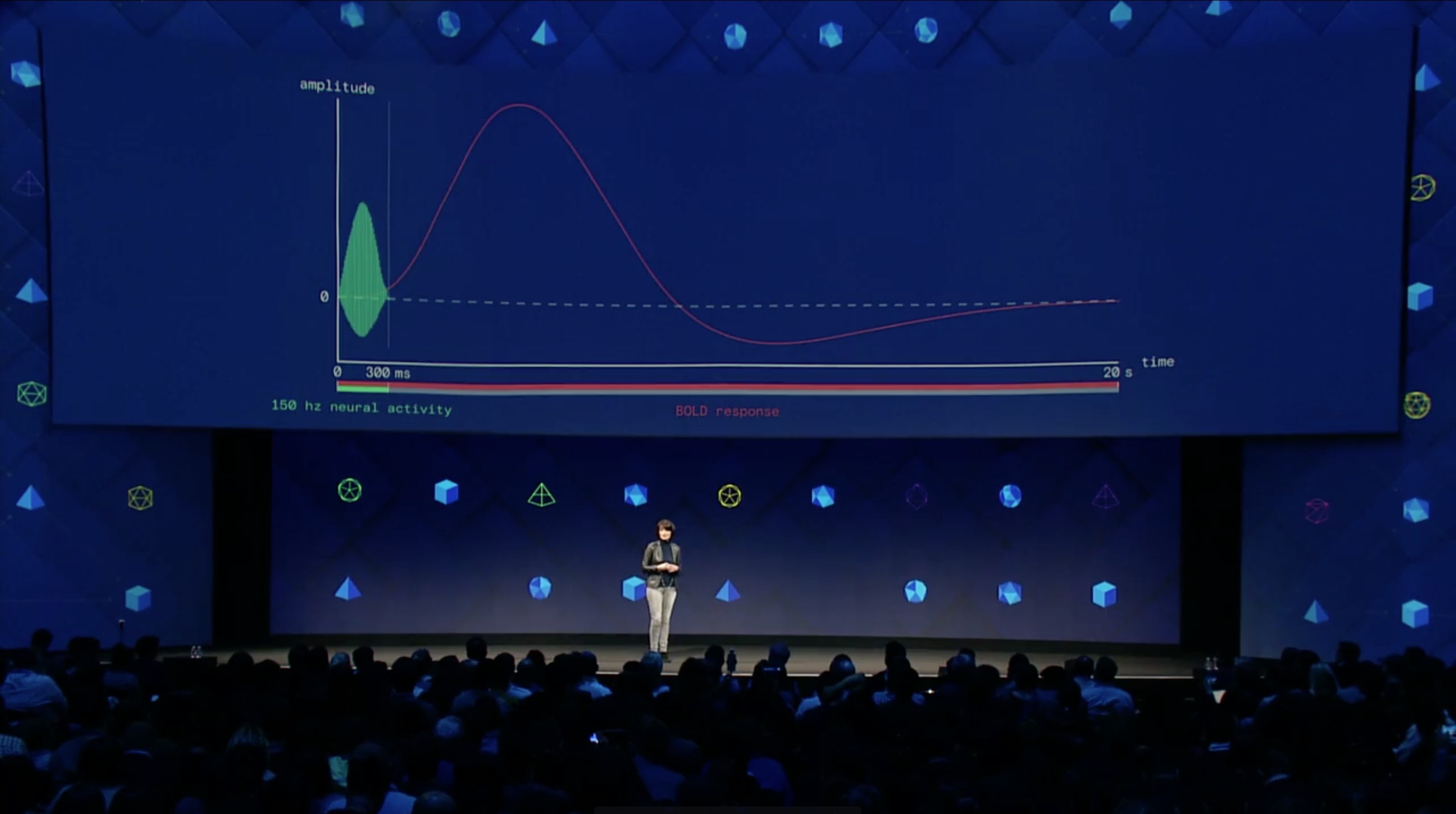 Speaking Through Your Skin

The second project will focus on making it possible to for people to recognize words with their skin, draws inspiration from Braille and Tadoma—a method of communication used with some people who are both deaf and blind where they place a hand on the face of another person to feel the vibrations and air as that person speaks. Researchers built a device with 16 actuators on it and strapped it to an engineer’s arm. Another engineer had a tablet computer with nine different words on its display; as he tapped the different words—like “grasp,” “black,” and “cone”—she felt vibrations on her arm that corresponded with the words and was able to correctly interpret that she needed to pick up a black cone on the table in front of her.  The researchers are taking a spoken word, like black and separating it into its frequency components, then delivering those frequencies to the actuators on her arm.

Building 8 researchers think of this as a way to deliver language on the skin that eventually people will be able to use this method to distinguish between about 100 words—or more. They may also use non-verbal signals like pressure and temperature.  The idea is to eventually have a wearable that sends messages you can feel, without having to take your phone out and, say, interrupt an in-person conversation you’re having with someone. 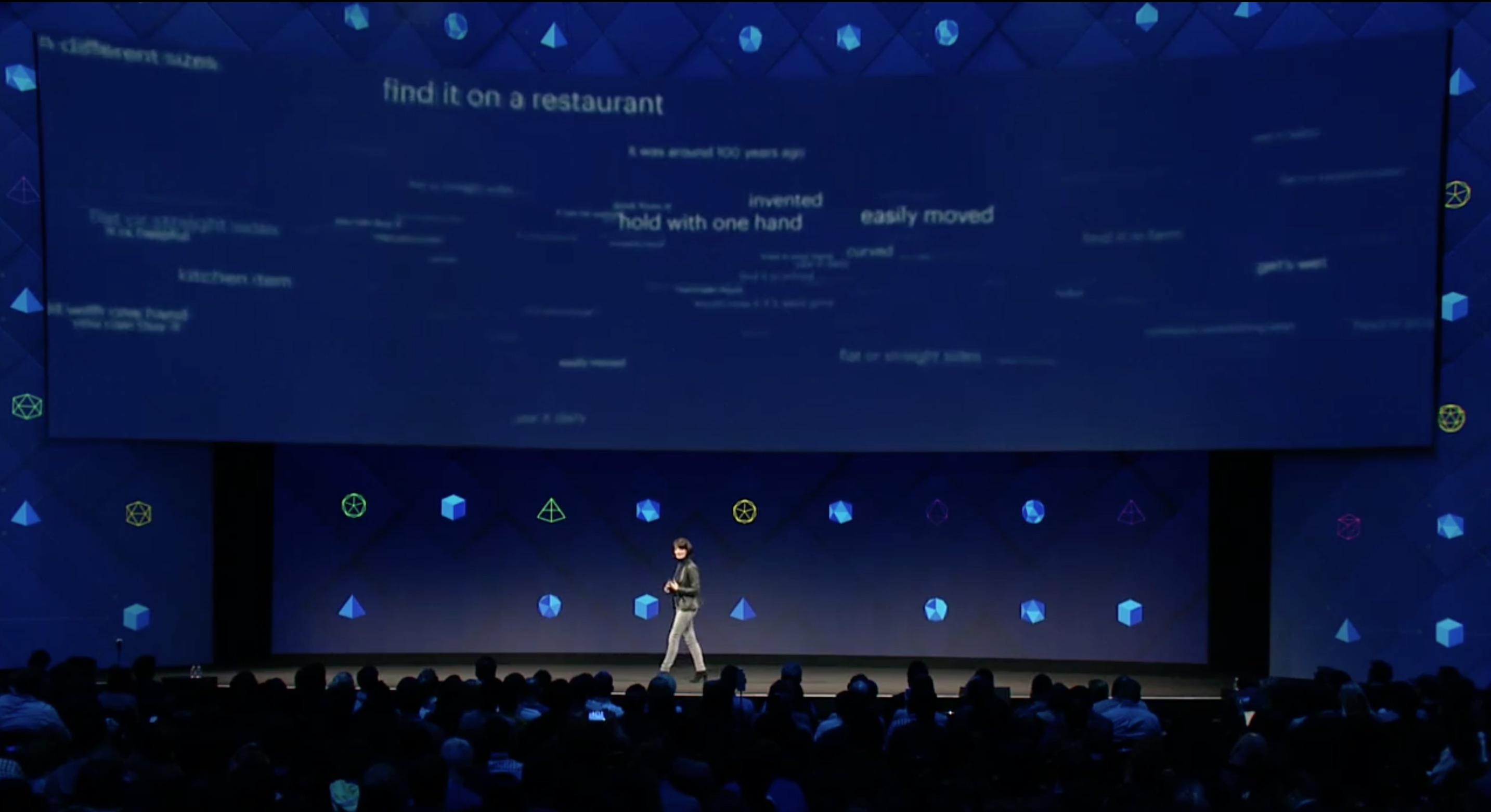 The Voice First Revolution, Part Of It Will Be Silent

It is refreshing to see this grade of useful research shared.  I have kept silent in public about Silent Voice First for a lot of reasons ironically I could not speak of.  Now I can address this in a more direct way in public, in the future.  It is abundantly clear that the researchers at Building 8 are already meeting with robust results.  The idea that we will need to text with our thumbs to get things done is archaic and will be looked upon as quaint in perhaps 10 years or less.