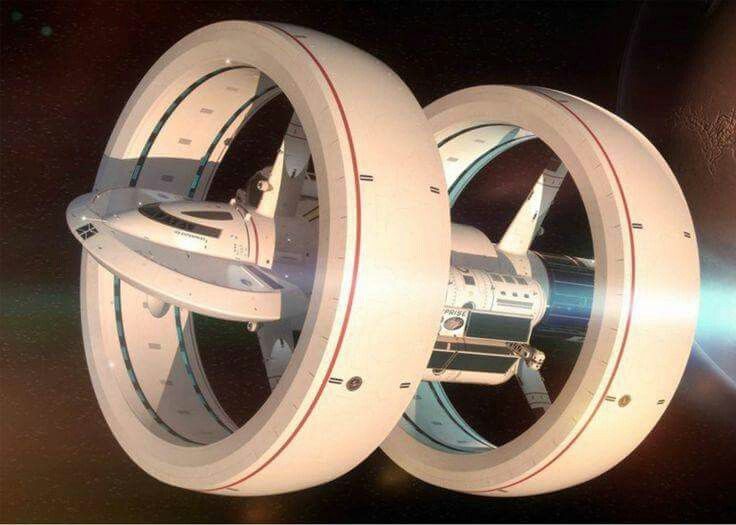 The patent application preamble: “The present invention is directed to a method of generating negative and positive gravity within thin walls that enclose a spacecraft’s space or cavity, possibly with passengers. One wall generates weak negative Ricci curvature and another wall generates weak positive Ricci curvature in their centers. The machine achieves this by electric charge separation within at least two capacitors; each capacitor consists of two or more thin conducting layers and of one or more dielectric layers. In the case of 3 conducting layers, the rear capacitor’s conducting middle layer is charged with negative charge while the front capacitor middle layer is charged with positive charge. In absolute value, the middle layers may have more charge than the sum of charge in the layers around them. In another embodiment of the invention, at least one of the capacitor layers in each one of the two capacitors is replaced by a rotating conducting curved plate or with a thin curved drum shaped coil in which electric current flows, in order to generate a dynamic component of the electric field. By using the capacitors alone, the Machine generates a very weak warp drive with negative and positive gravity which can be as low as 18 orders of magnitude less than required by an Alcubierre warp drive’s classical (+, -)10.sup.27 Kg. In that aspect of the invention alone without a dynamic field, the machine will not manifest any measurable propulsion.”

So what do we have here? We have a very intriguing patent application. But it is currently just an application. Although the idea sounds fantastical, in physics, it is what is known as the Alcubierre Warp Drive. On paper, it is a highly speculative, but very possibly valid, solution of the Albert Einstein field equations. Specifically how space, time and energy interact. In this particular mathematical model of spacetime, there are features that are apparently reminiscent of the fictional “warp drive” or “hyperspace” from notable science fiction franchises, hence the association.

Since Einstein first proposed the Special Theory of Relativity in 1905, scientists have been operating under the restrictions imposed by a relativistic universe. One of these restrictions is the belief that the speed of light is unbreakable and hence, that there will never be such a thing as faster than light space travel or exploration. Even though subsequent generations of scientists and engineers managed to break the sound barrier and defeat the pull of the Earth’s gravity, the speed of light appeared to be one barrier that was destined to hold. But then, in 1994, a Mexican physicist by the name of Miguel Alcubierre came along with proposed method for stretching the fabric of space-time in way which would, in theory, allow faster than light travel to take pace.

This is a patent application from a researcher that has been building such a device, perhaps with the assistance of a government. There is also a very serious report by NASA called “Warp Field Mechanics 101” [1].

I am always challenged with the balance of what I offer for free and what I offer to members and clients. I feel that just pointing out this patent, that very few have noticed or simply discredited is of exceptional value. For the rest of how I view this I will offer an overview to members of Read Multiplex.

If you are a member, thank you. To become a member, please click on the link below and join us.