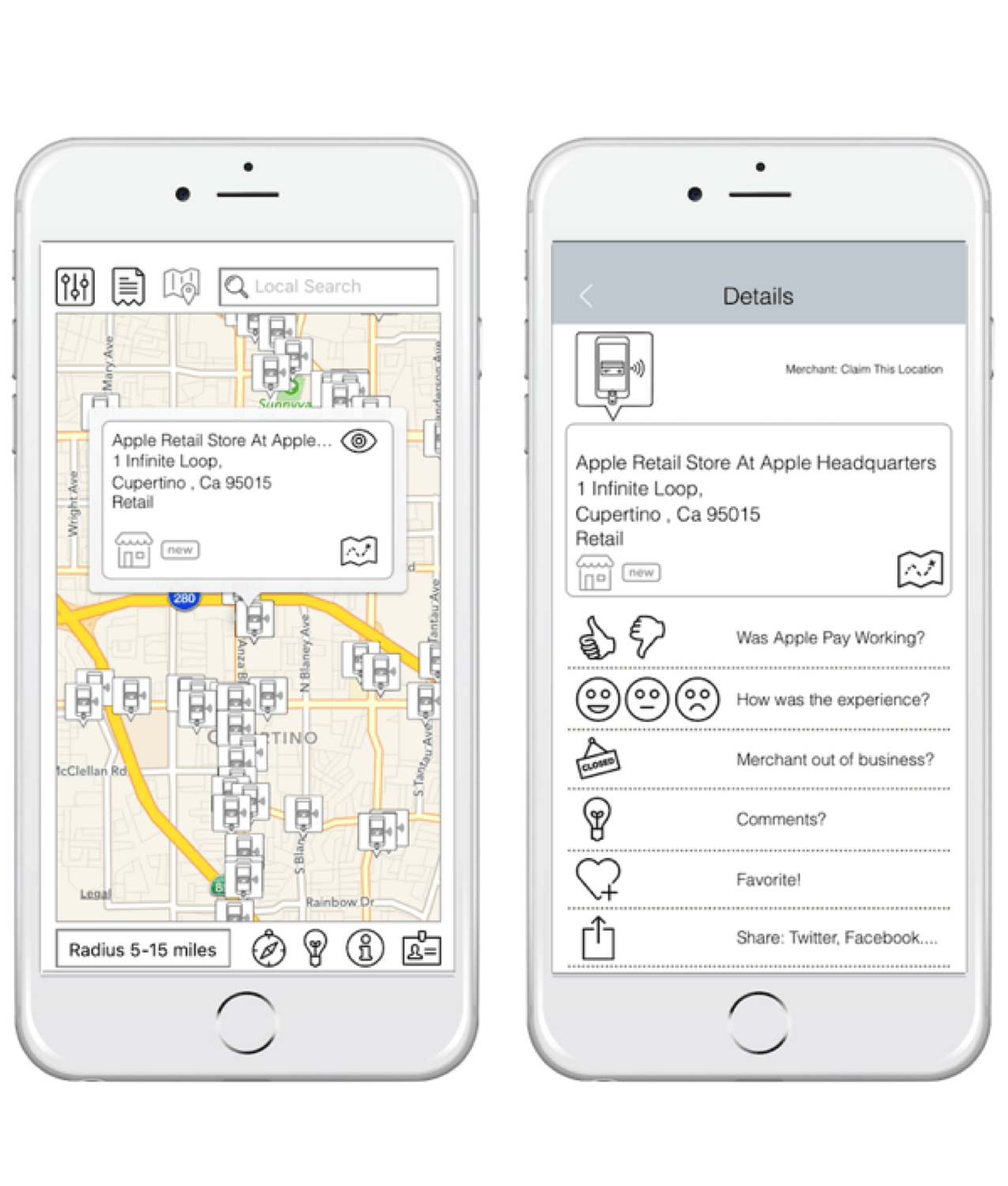 “It is challenging to determine whether a merchant terminal accepts contactless payments (i.e., if the NFC reader is enabled). In some stores, even if the POS terminal displays a contactless symbol, the reader is not turned on. The lack of clear marketing creates customer uncertainty about whether they can use a Pay wallet at that merchant location. They may be looking for each Pay wallet’s respective logo instead of a contactless symbol on the POS terminal and hesitate to pay or ask questions, especially when there is a long checkout line” —Elisa Tavilla, Boston Federal Reserve  Bank [7]

It was a warm summer day in 2010 and I just completed my first map of merchants that have NFC equipment installed, in the US.  This was a few years before Apple Pay, but I was certain, what I called the iWallet would be released by Apple [1].  I had worked in the payments industry since the 1980s and had conducted 100s of empirical studies and field research.  In 2010 on this summer day I knew Apple would have a rather large problem with the “Chicken/Egg” issues, one is: merchants may accept NFC payments but there is (is still not) a central reporting system to notify anyone, even the merchant themselves.  In my 2010 study, I determined that many companies had some minor success to motivate merchants to have NFC from the Chase Blink card [2] of 2005 up to the first versions of Google Wallet and the ISIS SoftCard system [3].  Each system appeared to be proprietary but in fact all worked together.

Fast forward to early 2013 I found even more compelling public information that confirmed the iWallet program via a series of patents Apple was applying for using NFC [4].  By this point in time I have built an automatic system based on decades of relationship in the payments industry of current NFC merchant locations active and the ones that become inactive for various reasons.  My associates at both Visa and MasterCard found the data I built to be fascinating as they did not have, and still do not have a easy and verified way to know NFC locations in the US.  I used the data from the map to conduct over a dozen studies related to NFC adoption for a number of clients, including one that I received anonymously through an obvious third part in the Bay Area of California.

“Apple Will Never Be In Payments Brian”

I wrote many postings on Quora related to payments and the iWallet in particular.  It was quite controversial and contrarian at the time, as “disruption” was in the air for payment startups and they demanded sometimes in very angry tones for me to stop my heretical postings as “there is no way Apple will be in payments in any way” and “startups will dominate it”.  I continued to write and I continued to consult with many payment companies urging them not to invest in general mobile wallets because the “land holders” will one day take back the land.

Apple Pay appeared to only be available at Apple started out with just 220,000 locations.  I remember yelling out at the event “no, there are over 1.5 million locations” the people around me, including one dear friend that worked at Apple for a long time looked in shock.  I knew I had unique data on NFC locations in the US, however I did not think Apple would choose such an almost impossibly low location count.

I went home that evening and talked to my wife and kids about the event.  My oldest son asked “why would they would do that?”, I had no clear answers.  Although I have had many off the record interactions with Apple over the decades, I did not have a direct contact on the Apple Pay team.  I spent the rest of the week reaching out with some success.  I was told it was conservative numbers that will change.  I mentioned how many locations I had surfaced and they were shocked.

I love new payment technology and have used an NFC card since 2005 in the US.  When Apple Pay became active, I went out and tried it at merchant locations on my database.  Just about every merchant, over 50 in the first few days, were shocked for a number of reasons.  The biggest reason is “I did not know my terminal could do that”.

I assumed Apple would do something about merchant discovery and waited.  Almost one year later I was taken back by the reality that Apple would do very little to help Apple Pay users surface and discover merchants.  Thus was my frustration I decided to code an app and to see if I could in some way help solve the merchant discovery quagmire.  By November 10th, 2015 I released the iOS app Pay Finders [5], with over 2.7 million North America Apple Pay locations [6], it is now over 5.9 million locations in North America.  The company was and still is, just me. It was and is a hobby and it is an app. Find Pay Finders here.

“One of the knocks on Apple Pay is that people don’t know where they can use it, since a store needs to have the right checkout equipment to accept the tap-to-pay service. Self-proclaimed Apple fanboy and payments industry veteran Brian Roemmele hopes to change that.

Roemmele, a well-known entrepreneur, consultant and researcher in the world of digital payments, has created Pay Finders, an iPhone app that shows people which businesses around them accept the mobile payments service. The app is not the first app of its kind, but Roemmele hopes it will be the most accurate by combining crowd-sourced data from Apple Pay enthusiasts with data from industry companies and other sources.

‘Why don’t people use Apple Pay?” Roemmele asked rhetorically. “A, I didn’t know the business accepted Apple Pay or B, I forgot.’”

Today Pay Finders data is used by millions of people.  Some users consult the app daily.  Along the way I was told that no one would care about a map of Apple Pay locations.  Perhaps, but it turns out there are a lot more that care to use Apple Pay and will actively not only seek out locations, but to supply new locations and to verify locations in the directory.   Pay Finders is also the largest crowd sourced NFC map in the world. 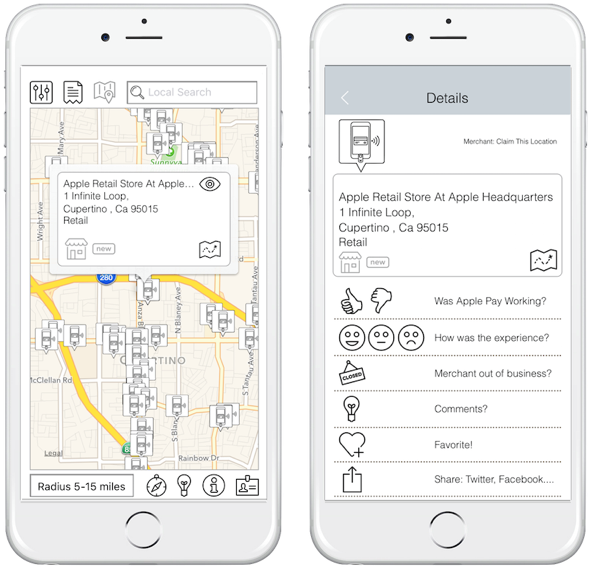 Apple, a company I do not hide my love for, did try to help discovery via a convoluted and ill conceived plan to use Yelp as the data source.  This turns out to be useless and hopeless.  Yelp has no real active way to confirm locations are active and no active way to full conclude a merchant location is no longer accepting Apple Pay.

This brings us back to the Boston Federal Reserve Bank report on mobile wallets [7].  Here is the key findings:

Overall, the team found this mobile payments research experience informative. Many members continue to use their mobile and digital wallets regularly, but none are ready to leave home without their physical wallets. Some of the team’s key findings include:

Key finding number 4 confirms the exact reason why I built Pay Finders and why I harbor some frustrations with Apple.  I still love Apple but they have not solved the problems presented in number 4, Pay Finders 2.0 has.  The user will never need to open the app, the lock screen will tell them the moment they enter the store and in many cases at the checkout counter, that Apple Pay is accept.  This functionality goes a long way in solving the key findings form the Boston Fed.  I am contemplating the release of Pay Finders 2.0. Holding me back is cost, it will take a huge server load to do millions of push notifications.  Also holding me back is the cost of 12 decimal place map location accuracy, that costs a bunch.  Version 2.0 would have been out day one if I solved this financial issue.

To be clear, Apple Pay is still the fastest growing payment modality in history.  It will continue to be the great success that it truly is.  I just know that it can be far, far more successful and now the Boston Federal Reserve Bank agrees.